I arrive at North Berwick Railway Station at around lunchtime and walk out of the town and along the coast road.  The waters of the Forth are grey and choppy and the Bass Rock is still white with the thousands of gannets who came to nest on it during the summer.  They will soon fly off to the warmer climes of Morocco.  As the cold wind from the sea cuts through me I think that one day it would be nice to follow them for a bit of winter warmth.

The pavement along the road soon ends and I walk along the grass verge and past Tantallon Castle.  An imposing ruin perched on the cliffs above the sea.  About a mile further on I come to the road that leads down to Seacliff and the beach there.  I follow this down for a little while and then turn off into a muddy path through the woods.  Through the nettles and dying back stalks of plants unknown I walk to the dark and overgrown ruins of Auldhame Castle. 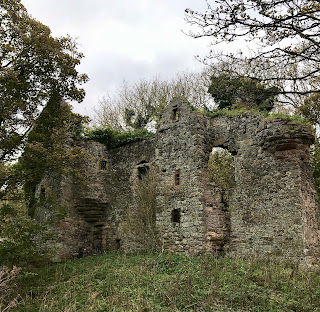 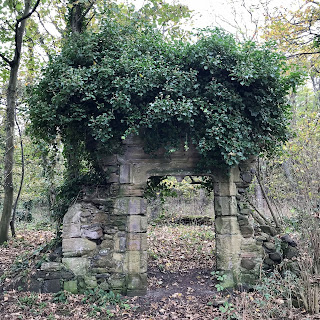 The castle sits on the cliffs that overlook Seacliff beach, in an area where one of the three corpses of Saint Baldred of Tyninghame is said to be buried.  Saint Baldred was a Northumbrian monk who is believed to have founded an abbey at Tyninghame.  He also had a small hermitage on the Bass Rock, though sometimes lived in a cave on Seacliff beach.  After his death there was a disagreement between three of the parishes, he had close association with, as to who should get his body.  Holy men from each parish spent the night together in prayer and the next morning there were three bodies of Saint Baldred lying there - one for each parish.  So, everyone went home happy with a body to bury.

Auldhame Castle was built in the early 16th century for Sir Adam Otterburn (1491-1548). He was a lawyer and a diplomat who served the Scottish Monarchy.  He was the Kings Advocate to James V of Scotland and Secretary to Mary of Guise.  He also served as the Provost of Edinburgh.  In 1534, on behalf of King James V of Scotland, he went to London and signed a border peace treaty between Scotland and England.  In 1536, he was again sent to London after Henry VIII had requested a meeting with James V.  There he discussed the motives for the meeting and also what the agenda would be.  In 1538 he wrote a speech to welcome Mary of Guise to Edinburgh, who had recently married James V.  Otterburn then had a bit of a falling out with James and spent some time in prison before being deprived of his office and fined £1000.  When James died in 1542, the Earl of Arran took over as Regent and politics in Scotland heated up somewhat with various factions and rivalries forming.  Henry VIII of England made an agreement with the Earl of Arran that the daughter of James, the infant Queen Mary of Scots, should marry his son, Prince Edward. Some in Scotland favoured the marriage while others preferred to keep their alliance with France.  Mary of Guise persuaded the Earl of Arran that the agreement should be reneged, and this then led to an English invasion, which was given the name the Rough Wooing.    In 1544, the English army landed at Granton and Otterburn was sent to negotiate with them.  However, they refused to negotiate and burned the town of Leith and parts of Edinburgh.  In 1547, Otterburn travelled to Hampton Court to negotiate with the then King of England, Edward VI, to try and avoid the conflict between the two countries resuming.  Again, his negotiations failed, though he was sent away with a gift of £75 for his efforts.  He then wrote to the Earl of Arran telling him about the preparations he had seen the English army making and how ready and prepared they were for war.  The earl of Arran ignored his warnings, and the Scottish army was defeated at the Battle of Pinkie later that year.  In 1548, Otterburn died after being assaulted in Edinburgh by the Laird of Annestoun, Patrick Mure, who was a servant of the Earl of Arran.  Mure and his son were charged with treason and murder, but it is unclear what happened to them and if any further proceedings took place. 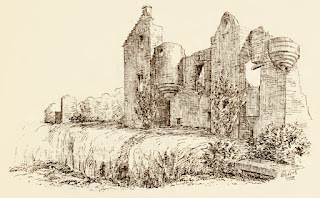 The ruins of Auldhame Castle circa 1892

There is not much left of the building now, just the outer wall that faces to the sea and part of the vaulted basement.  In the basement someone has built a barbecue with old stone and a wire shopping basket.  It looks quite new and is maybe someone’s Covid hidey-hole.  It is sheltered from the wind and with a fire going it would be quite a comfortable drinking den. 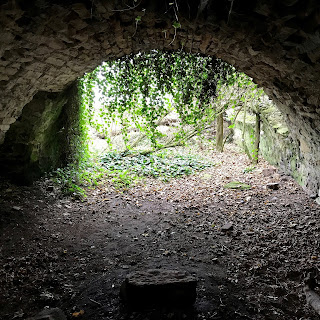 Outside, against the inside of the outer wall, a tree has fallen, and I scramble up this to a ledge by one of the second storey windows.  The view from this must have been pretty spectacular back in the day but is now blocked by dense woodland.  Below me I can hear the waves crashing on the beach and children shouting.  Around me crows caw and pigeons coo and small creatures scrabble around in the undergrowth. 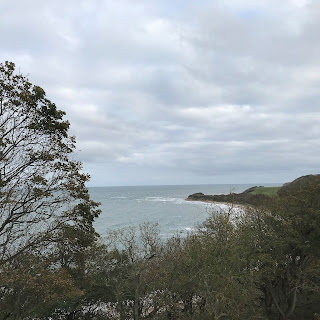 View from the clifftop by Auldhame Castle 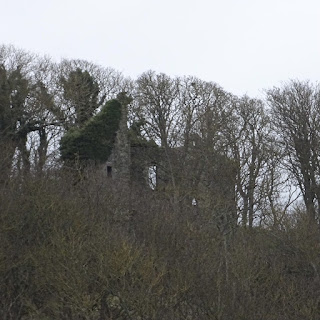 View of Auldhame Castle from Seacliff

Near to the window, there is a narrow opening in the wall.  I place a Skulferatu there and scramble back down. 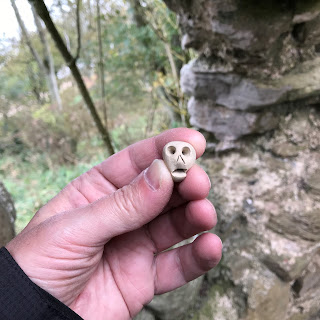 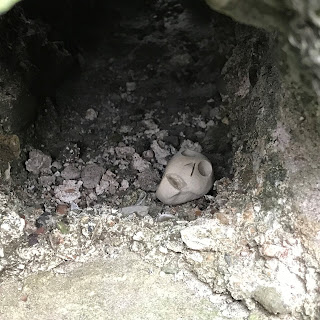 Skulferatu placed in hole in the wall 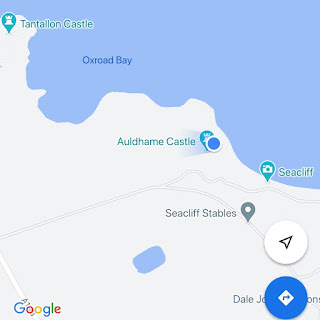 The coordinates for the location of the Skulferatu are –

I used the following sources for information on Auldhame Castle –

The Castles of Scotland

Auldhame | Seacliff | The Castles of Scotland

Sketch of Auldhame Castle from -

By David MacGibbon and Thomas Ross