When I go cycling from Edinburgh to North Berwick, I like to take the coastal road and enjoy the scenic route.  Just before I reach Gullane, I turn off from the road and take the bumpy path along the John Muir Way and cut down to the rather spectacular ruin of Saltcoats Castle.  On a sunny day it’s relaxing just to sit in the castle grounds, rehydrate and take in the great view. 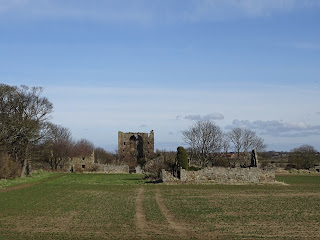 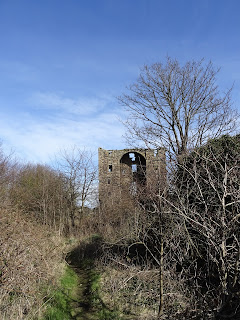 The history of this rather marvellous ruin starts with a legend of daring and bravery, or the needless slaughter of a wild animal, depending on your point of view.  The story goes something like this…

…back in the mists of time, when the lands that now make up East Lothian were sparsely populated and thick with forest and wild beasts, there was a huge, wild boar that terrorised the area.     This beast was enraged by anybody it saw on its territory and had chased, gouged and maimed a dozen or so people.  Soon it got to the stage where those in the villages were terrified of travelling to market, the peasants working the fields were terrified as they worked, the landlords in their stately homes were terrified of walking outside in their gardens and those travelling from Edinburgh towards England took a long route round to avoid the area.  The King, on learning what was going on, offered a large reward to anyone who could kill the boar and rid the land of its menace.  Many tried and died in their attempts.  The boar always seemed to be one step ahead of them and ambushed many a brave hunter, slicing through their weak and mortal bodies with sharp tusks that seemed to be made of steel.  Soon the boar was being seen as more than just a beast, it was a demon sent from Hell or a punishment from God.  The churches rang out their bells and the holy prayed in hope that the good Lord would end their torment.  But he didn’t.

Then along came a young man from the Livington family.  His family had fallen on hard times and he had decided that to improve their lot he would take on the challenge of killing the boar.  First of all, he set about preparing for the task and had a special glove made of thick leather.  The inside of this glove was heavily padded with down.  He also had a steel helmet, body armour and a sword made for the task.  Expensive though this was, he persuaded the craftsmen who made the pieces for him that he would pay them when he had killed the boar.  Such was his self confidence in completing this task that they all agreed to this and he was soon ready to go on the hunt for the deadly beast.

On a summer’s morning young Livington set off out into the forest.  As he went, he would call out every so often in order to attract the boar.  However, it was almost as if the beast could sense him and his purpose, and for hours Livington walked without seeing any sign of it.  Growing weary from walking, Livington stopped near a stream and drank from it.  He sat by it for a while and decided to give up for the day and to start his hunt again the next morning.  As he rose to make his way back out of the forest, he heard something crashing through the undergrowth.  It drew nearer and nearer.  Livington drew his sword and readied himself.  With a roar the boar burst through the undergrowth to where Livington stood.  The creature was huge with tusks like sabres and eyes that glowed red like the hot coals of a fire.  For a moment it stood still staring at Livington, then it stamped at the ground, snarled, and rushed at him with tusks out.  Like a matador, Livington spun to the side and the boar charged past.  It came to a skidding halt and turned again to face him.  It’s eyes burning with anger and hate it let out a roar and charged at him.  Livington once more sidestepped the boar as it reached him, howling with frustrated rage it turned and came at him again.  As it was almost on top of him Livington thrust his gloved arm down into its mouth.  The shock of this caused the beast to stumble and fall, taking both it and Livington to the ground.  The beast, unable to move its head enough to gouge Livington with its tusks, kicked out at him, catching him several times about the body and denting the armour he wore.  In this onslaught Livington almost lost grip of his sword, but just managing to keep hold of it he thrust it up and through the beast’s heart.  The beast let out a groan, almost human, then sighing it died by Livington’s side.  Exhausted, Livington lay by it and prayed a prayer of thanks to the Almighty Lord above.

A group of five woodsmen, had bravely ventured that day into the forest to chop wood, and had heard the commotion.  Cautiously they approached to see what was going on and saw Livington lying beside the body of the boar.  Thinking that he must have died in the fight, they went over to offer prayers for him.  On seeing that he was alive and suffering from no fatal wounds, they helped the exhausted man to his feet.  They then cut and stripped a large branch and tied the body of the boar to this.  Four of the woodsmen carried it out, while one carried Livington on his shoulders.  As they walked out through the forest, they came across a den of six squealing little piglets. The six little piglets mama boar had been protecting from those who encroached on her territory.  These were gathered up, placed in a sack, and handed to Livington.

On hearing that the boar was dead, villagers from all around came out in celebration.  That night Livington and the villagers, from landlord to peasant, all feasted on suckling pig and wild boar sausages, black pudding, and roast pork.  All washed down with local ales and fine wines imported from afar.

A few days later the King heard that the boar had been killed.  For Livington’s act of bravery and ridding the land of the terrible beast the King granted him the lands from Gullane Point to North Berwick Law.  It was on the land acquired by Livington, near to Gullane, that Saltcoats Castle was built.

Up until the 1790s the helmet said to be worn by Livington when he slayed the boar hung in the church at Dirleton in East Lothian.  When the church was being repaired the helmet was removed for safekeeping and was lost.

At the mouth of the Peffer there is a small stream that goes by the name of Livington’s Ford.  It is here that Livington supposedly slew the wild boar.

Anyway, let’s get back to the castle…the name of Saltcoats Castle is thought to come from the fact that it stands on ground that was in ancient times a salt marsh.  The castle is a Sixteenth Century courtyard castle that rose to a height of three storeys.  It was enclosed by a wall and in the grounds, there would have been an extensive garden and orchard.  There was also at one time a bowling green to the east of the castle, though all signs of this have been lost as it has been ploughed over numerous times and become part of the surrounding fields.

The castle was built in around 1590 for Patrick Livington and his wife Margaret Fettis of Fawside.  In the early 1700s the castle and estate were acquired by the Hamilton family when James Hamilton of Pencaitland married ‘the heiress of Saltcoats’, Margaret Menzies.  The castle was inhabited until around the late 1790s, the last tenant being a Mrs Carmichael, who died there.  It was then left uninhabited for several years.  Around 1810 much of the stonework was removed to build farm steadings and walls.  The ruined cottage which stands at the side of the castle was built around this time and on its front wall there is a panel taken from the castle with the coat of arms of Patrick Livington carved into it. 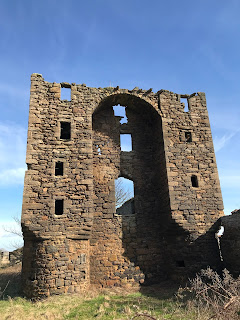 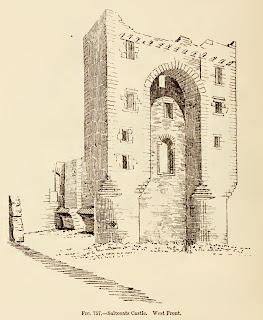 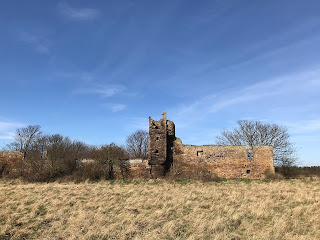 Side view of castle ruins and tower 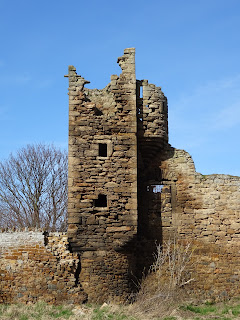 Side view of castle tower 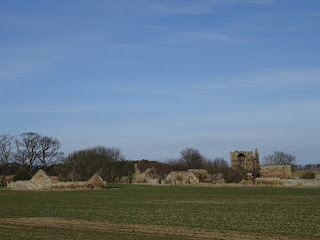 View of castle and ruins of farm steadings

Saltcoats Castle has now been designated as a scheduled monument.

The Skulferatu that accompanied me today was left on a ledge above the keyhole window on the tower. 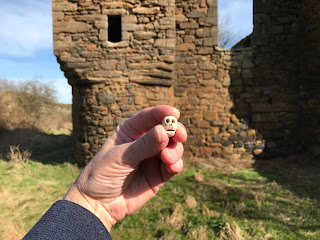 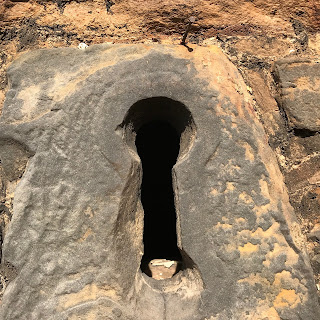 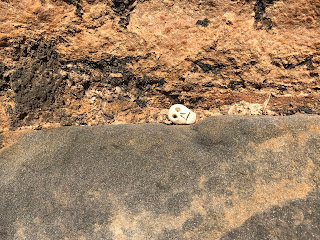 Close up of Skulferatu #26 on window ledge 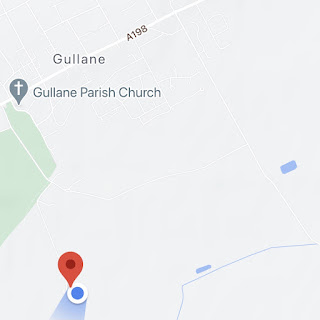 The coordinates for the location of the Skulferatu are:

I used the following sources for information on the castle –

By David MacGibbon and Thomas Ross

St Baldred of the Bass and Other Poems

Article and photographs are copyright of © Kevin Nosferatu, unless otherwise specified.